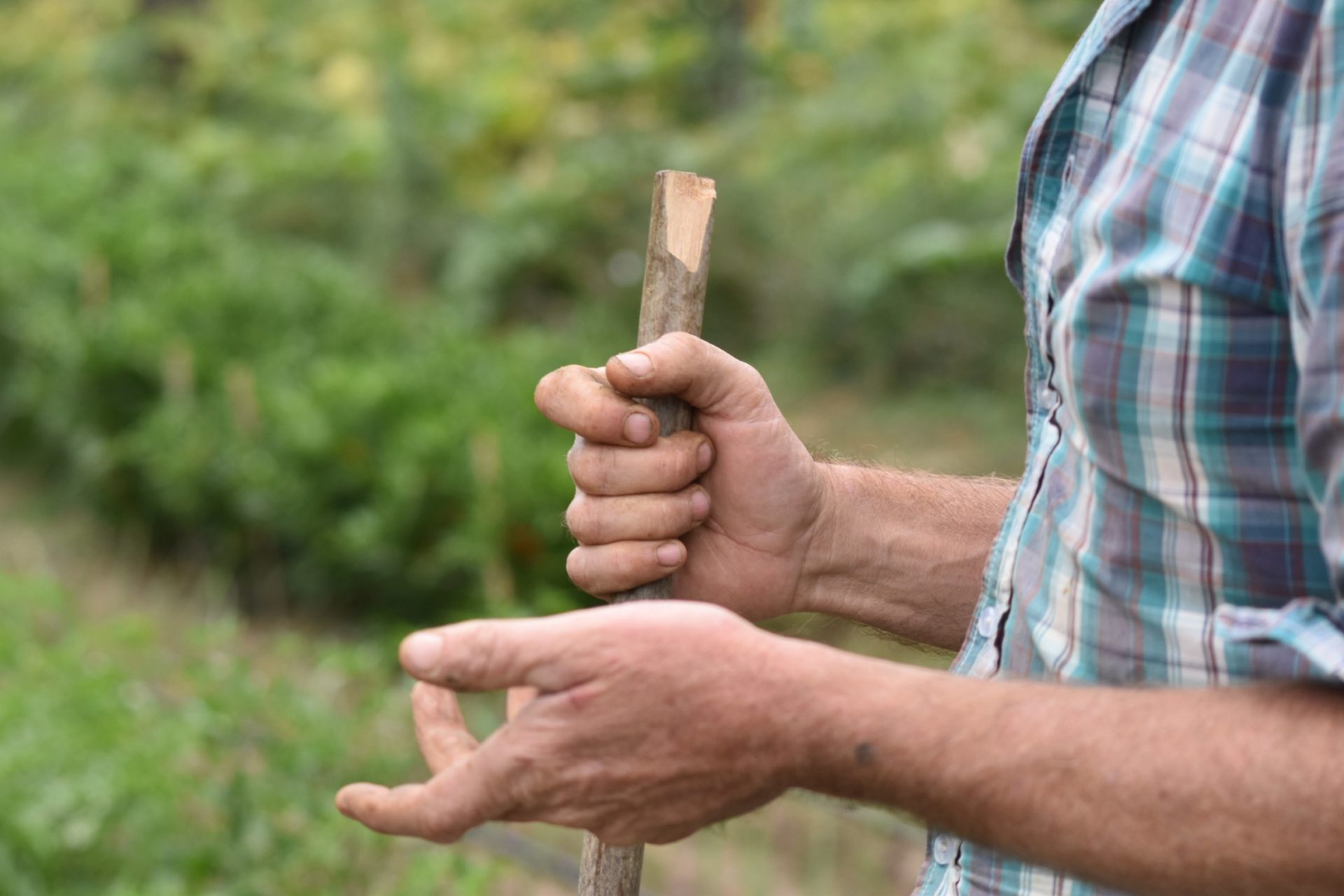 When I arrived at Villa Lena in late March during the height of a third Italian lockdown, the hotel was still shut, and the near empty estate – which resembles an idyllic Tuscan postcard, but better – transmitted a tranquility unlike anything I had ever experienced before.

A few hours after my arrival, as I sat in the villa’s back garden with my new colleagues feeling extremely overwhelmed at the beauty of my surroundings, I was introduced to Villa Lena’s head gardener, Gigi. I remember hearing his laughter before I actually saw him. It was a joyous laugh, the infectious kind that warms your insides. Immediately I understood the effects of Gigi’s larger-than-life presence. Gigi is adored by everyone who meets him, and I am positive that there are two main reasons for this, the first being his animated facial expressions. The second is that he is an exceptional story-teller as well as a natural entertainer. The minute he joins a conversation, his stories begin; stories about his past life as a showman, about rock legends he has worshiped since he was a teenager (Gigi has exceptional taste in music), stories about every plant, tree and flower you could ever think of. A brief interaction with Gigi simply cannot exist, because Gigi always has something meaningful to say.

In the months that followed, I watched as Gigi transformed five-thousand square meters of dirt into a glorious, flourishing orto full of fresh vegetables, fruit, herbs and flowers – all of which were used to create dishes at Villa Lena’s  farm-to-table restaurant. At the peak of the season, sometime between late July and early August, the orto was truly a sight to behold.

There were days when Gigi’s garden was so prosperous he would show up at the villa holding crates full to the brim with surplus tomatoes, aubergines and courgettes more vibrant than any vegetable I’d ever laid eyes on.

I remember one batch of uber-ripe tomatoes he brought over that had to be used right away, causing us to drop what we were doing to make a tomato sauce so sweet I remember wondering if someone had added sugar to it while my back was turned. Needless to say, no tomato sauce will ever compare.

On a rainy day, myself and Pierfilippo – who worked on the agriculture team and in the restaurant – walked over to the orto, where I photographed Gigi working the land while Pier asked him questions about the labour of love that is providing for a farm-to-table restaurant. The result was an insightful conversation that reveals Gigi’s astonishing knowledge of farming and deep-rooted respect for nature.

Pierfilippo: How long have you been doing this for?

Gigi: Organic farming? I think about ten years. But the countryside, working the land in general? Probably for twenty-five years now. Before Villa Lena I worked in gardens, in vineyards, I’ve done farm-to-table before too. And everything helps.’ 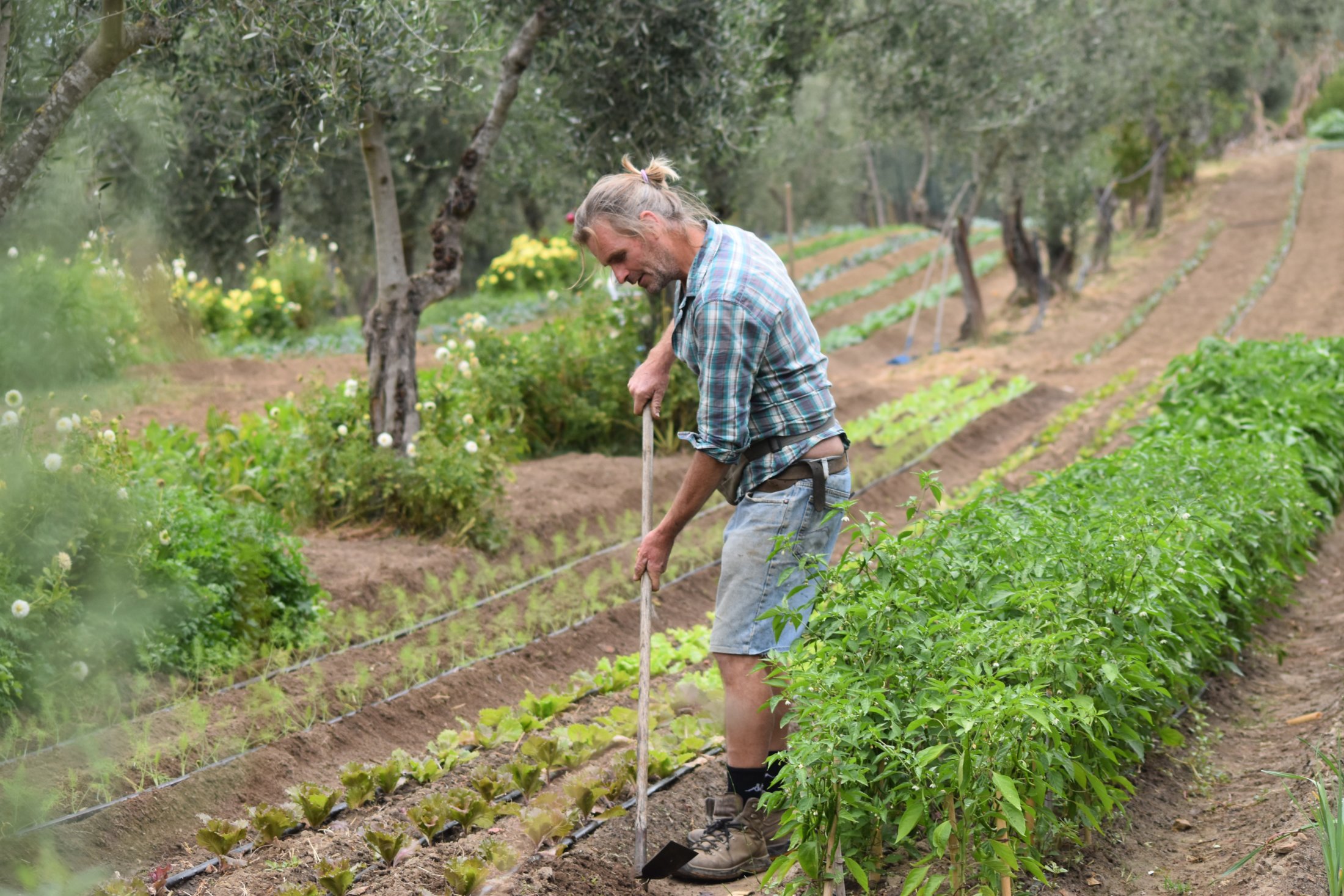 PF: Is your work one that requires patience? What are the qualities you think are required for this kind of job?

GG: Yes. Patience and total sacrifice. You have to to completely dedicate yourself to the orto, or you don’t get results.

PF: What do you mean by dedication?

GG: Complete dedication. The orto commands, as does nature. If today it rains, and tomorrow the sun is shining and it’s 38 degrees out, I have to react to those conditions. Right now it’s raining, for instance, which means that the organic sulfur I treated the courgettes with to prevent them from getting sick is washing off. That automatically increases my workload. That’s why I can’t come out with you for a pizza tonight, because the nature of my job means I need to respond to nature, who doesn’t listen to anyone! We’re also living a historic moment in nature in terms of climate change. I see it everyday when I work here.’ 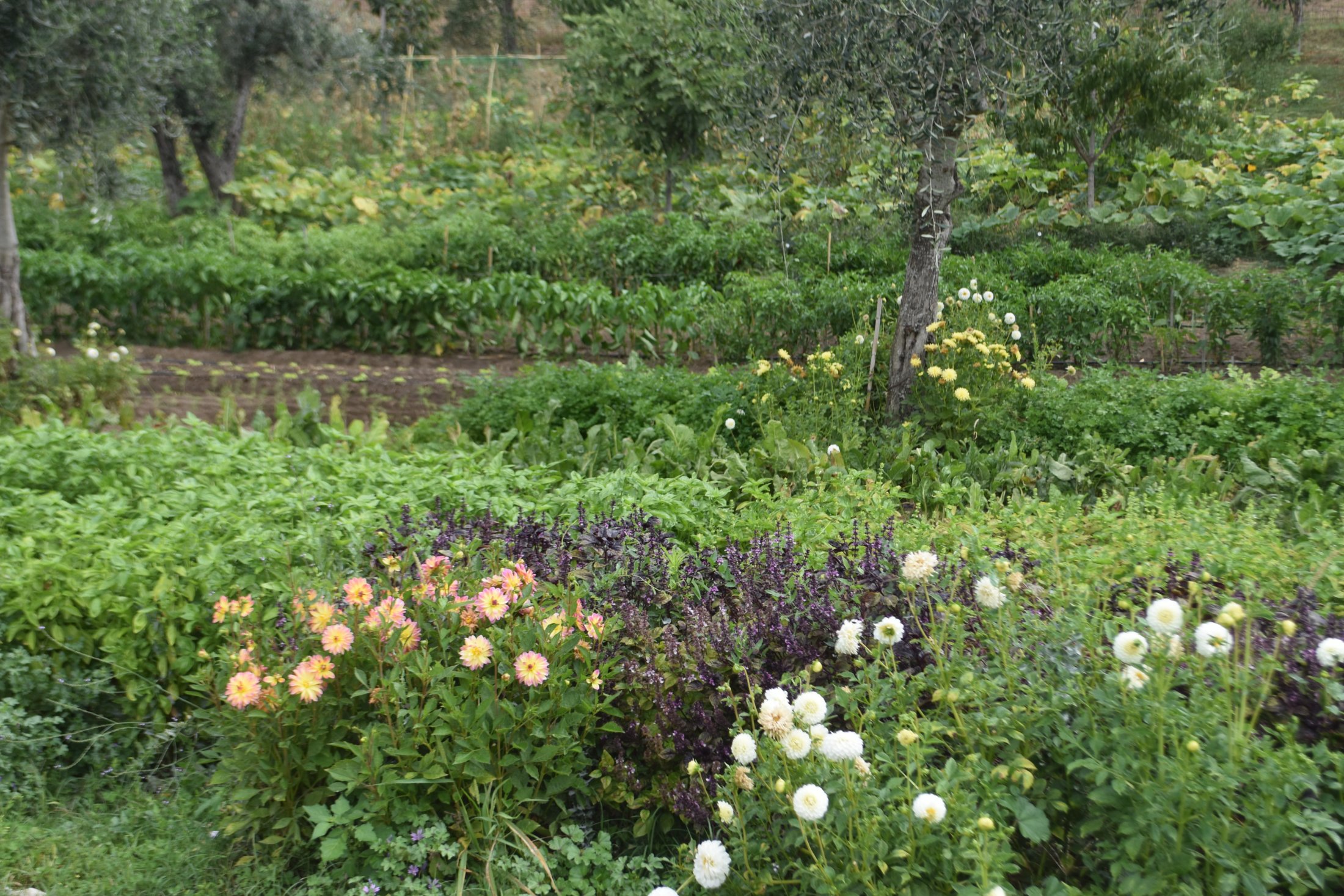 PF: You mention the courgettes getting sick. How do you prevent illness in the plants in organic farming?

GG: Prevention is essential. When tomatoes are still small during spring, if you wake up and feel how hot it is, how humid it is…there are prevention methods you have to employ, which aren’t just using a hoe on the land to re-shape the soil. I have to treat it. Some of the organic products I use, like white wine vinegar, for example, turns the water I use acidic – because if the water isn’t acidic, or the pH just right, then nothing will grow.  In non-organic farming, if it hails, the produce is protected by a greenhouse and therefore by the illnesses that too much water can cause. Here it’s different. I can’t let the illness come and then cure it. I need to prevent it.’

PF: So prevention over cure.

GG: Yes. When it’s sunny out, there’s dozens of white butterflies around here. Beautiful butterflies! But when the butterflies hatch their eggs, hundreds of them at once, if you don’t act right away…those cabbages over there won’t last more than a month. Because nature is beautiful, isn’t it? But it’s also a battle.

PF: And is everything you do here 100% organic?

GG: Everything here is organic, only organic. Everything. In organic agriculture you can’t use any chemical products. Most of the vegetables you buy in the supermarket have been treated, and come from greenhouses – which isn’t always necessarily a bad thing – or from far off countries, like Colombia! Organic can mean your eggplant will be scratched and stained. We don’t only have normal peppers here. We have chilli peppers, cigarette peppers, cowhorn peppers, frigitelli peppers. In winter, when it rains, nature is nurtured. It’s like human digestion. I don’t nurture the plant, I nurture the land. The land digests the organic fertiliser, making it absorbable for the plant.’ 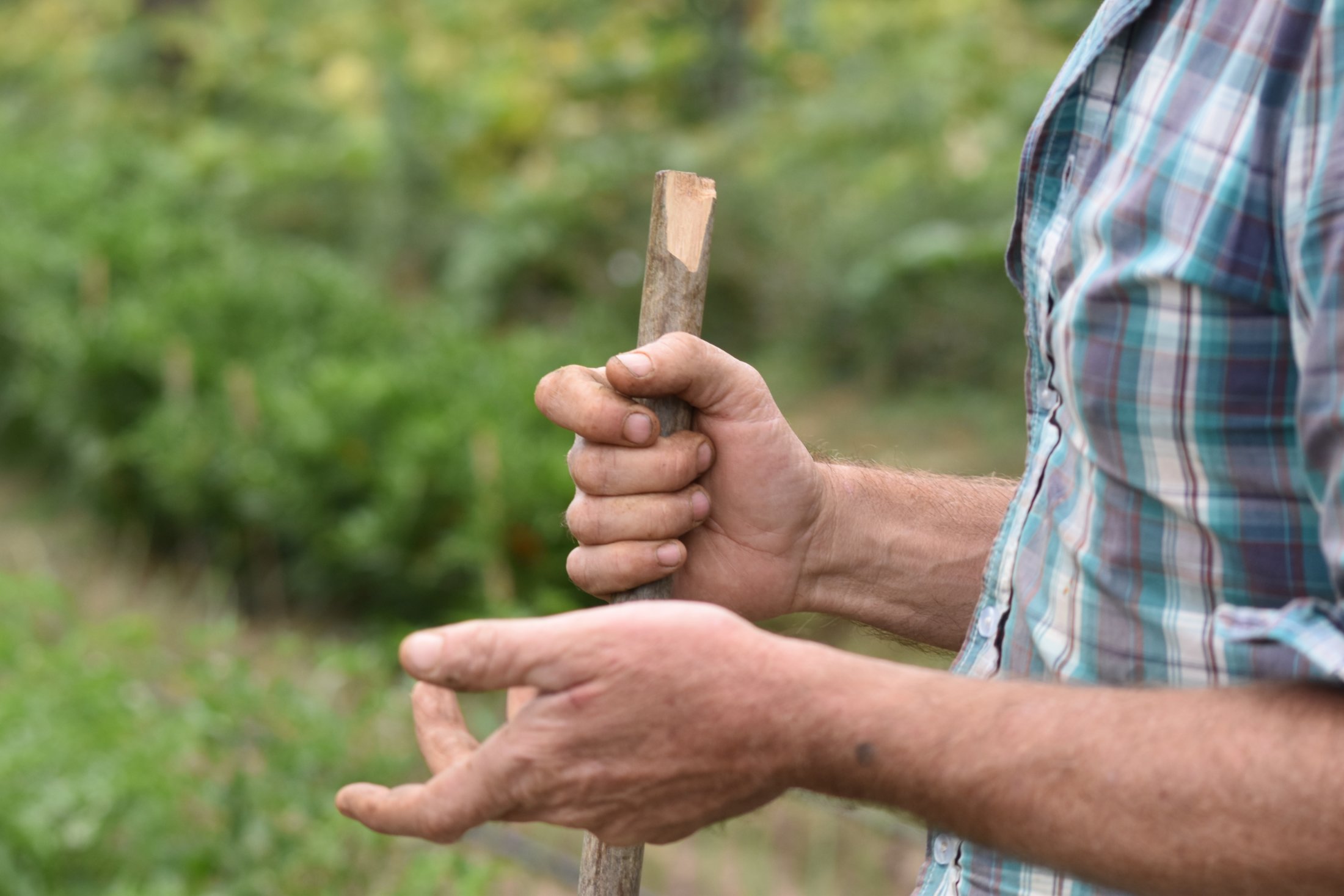 PF: And how does it work with the restaurant? Do you and Marco Baldeschi [Villa Lena’s head chef] communicate?

GG: Yes, we do. Marco gave me a general idea of what produce he wanted for the restaurant. If he tells me that next week there will be double the covers, then I need to increase the quantity of the produce. Sometimes it requires patience. With fruit it takes time. When I planted 400 tomato plants, the first week they only filled up a few crates. Now there are so many I don’t know what to do with them!

PF: What’s the plan for next year? Will anything change?

GG: Of course. This was my first year here, and it was Marco’s first year too. Everything is getting better. I understand the land better now; when you start working a new orto you still don’t know the land well. Now I do, and we can do more.’ 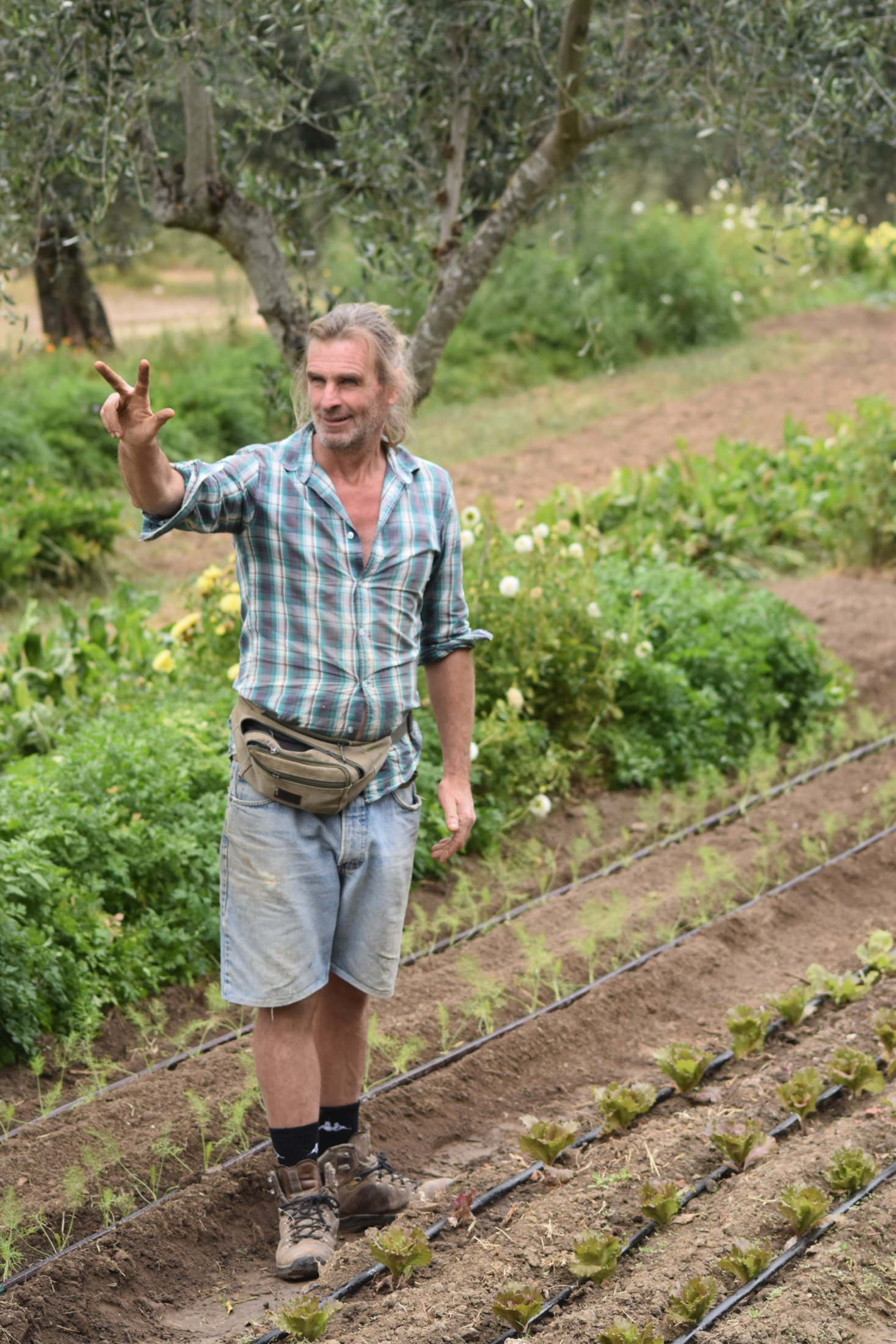 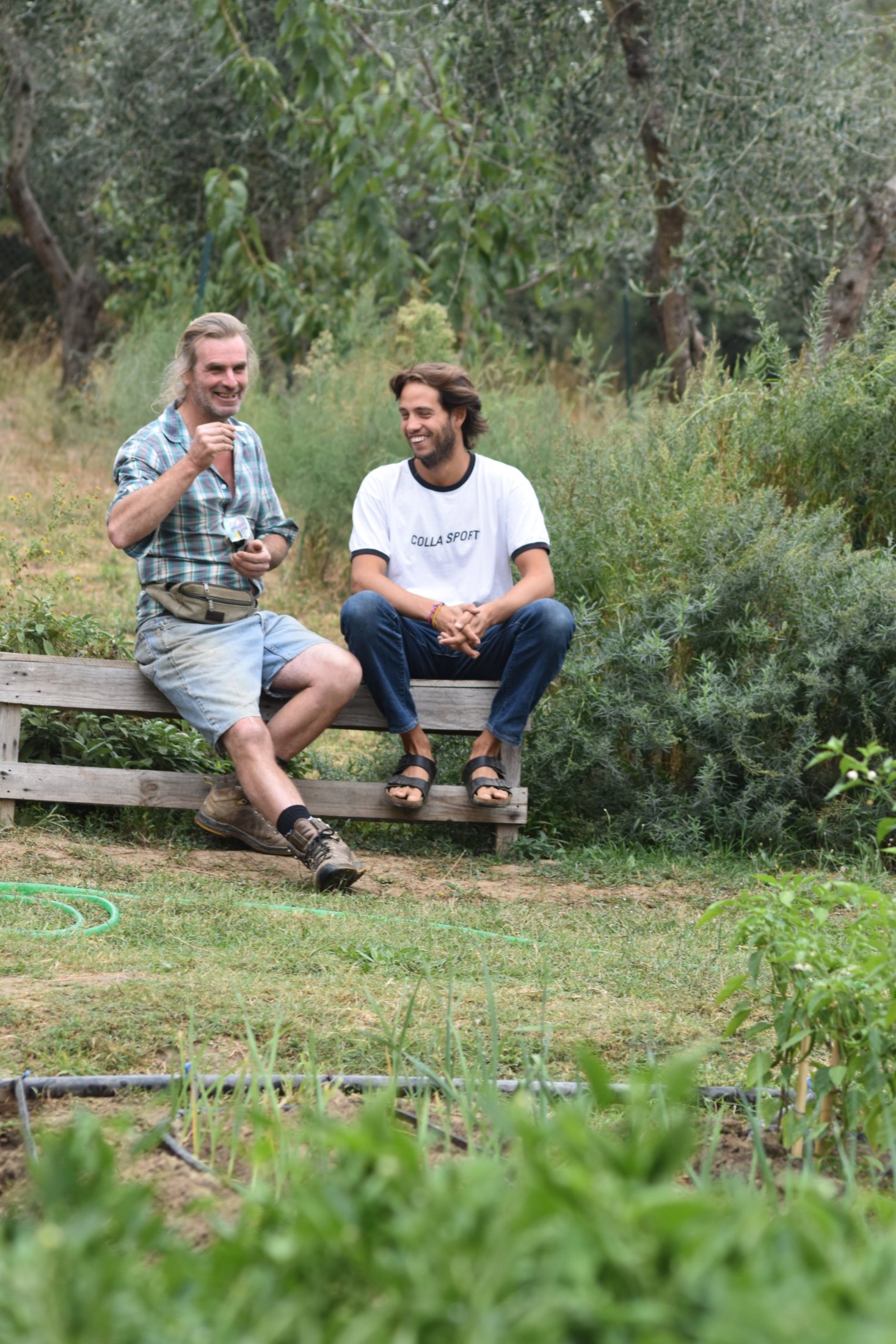 [This conversation has been translated from Italian to English]

There is something truly remarkable about consuming a dish made using an ingredient you have witnessed transform from seed to vegetable, so imperfectly plump and ready to eat it has quite literally fallen off the vine.

As an Italian who has lived in the UK for the past nine years, I always complained about the difference between Mediterranean produce and the stuff available in London supermarkets. I stand by this. Tomatoes in the UK taste like air to me. But Villa Lena’s orto pushed this to a new level, and showed me the magical things an organic vegetable – when cared for and nurtured by Gigi’s patience, along with the Tuscan sun and rain – can do to your palette.

Lisa Modiano worked for the Villa Lena Art Foundation from March – September 2021. All images by Lisa.