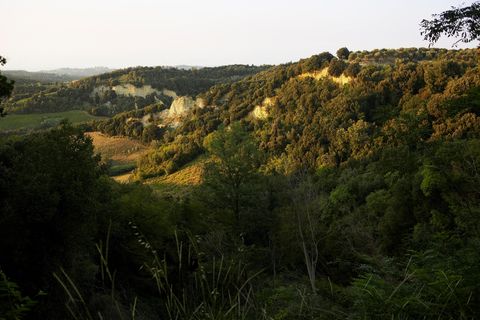 Ahead of the sale’s launch, our foundation intern Issy Carr shared her personal experiences of the  villa’s renowned artist-residency programme for Town and Country UK.

I remember clearly how I came across Villa Lena. It was midwinter in Edinburgh, when I was looking ahead to three more months of turtlenecks and woollen socks. The witch-like winter in Edinburgh is enchanting, but still I armchair-travelled, dreaming of long, balmy nights and la dolce vita – I was determined to spend the upcoming summer in Italy, having fallen in love with the country some years before following trips to Rome, Florence, Naples and Bologna. Unlike most countries I had visited (and with the help of Fellini, Bertolucci and Guadagnino), Italy was just like in the movies.

Soon, I found myself obsessing over an alluring villa in Tuscany – a wild and untouched hunting lodge that looked like a place for dreamers. When early spring came round, I was fortunate enough to be offered a summer job helping to run the established artist-residency programme here at Villa Lena.

The property dates back to the late 19th century, when an Italian aristocratic family, Augusto and Tereza Del Frate, purchased the estate and moved to the nearby town of Palaia. A member of the Del Frate family completed ceiling frescoes and it was quickly established as a favoured hotspot for parties, with a hedonistic heyday in the early 20th century. After various repossessions, Villa Agriturismo was founded by the art-world connoisseur Lena Evstafieva, the music producer Jerome Hadey and the Parisian restauranteur Lionel Bonsemoun, who collaborated and re-opened the estate as a unique creative space for artists and guests alike.

Home to artists, creative contributors, chefs, yogis and gardeners, Villa Lena is a bewitching place to spend a summer: the days are sound-tracked by cicadas and the light is always magical. This year, the residency has been stripped down for social-distancing purposes, but currently in situ are the French artist Coco Brun, the German writer Lilli Heinemann and the British artist Eloise Lawson. For a group of people who have never met before to live under one roof for six weeks is an extraordinary experience: friendships have developed and we’ve evolved as a household. On some nights, we eat all together, family-style, outside the villa, drink together at sundown and dance beneath the stars. I don’t doubt that the connections made here will continue to grow beyond the villa walls.

As we near the end of the first residency of this season, the artists are beginning to think about the legacy they will leave. Each is asked to donate an artwork to the Villa Lena Foundation at the end of their time here – a visual memory that also serves as a way of raising funds to support the programme’s long-term preservation. This summer will also see the launch of the Foundation’s first digital art fundraiser on Instagram, with 100 per cent of profits going to UNICEF’s Covid-19 relief efforts in Italy and further afield. Kicking off on Monday, we will auction one of 14 unique artworks every day from the Foundation’s collection, made by artists during their time on the programme. Each morning at 10am GMT, Villa Lena will post a new artwork on its Instagram channel, with bidding closing at midnight GMT.

After months in isolation, we have had time to appreciate the small things in life, particularly being able to spend time with friends and family. The power of community has never been more important – and it is right at the heart of Villa Lena.