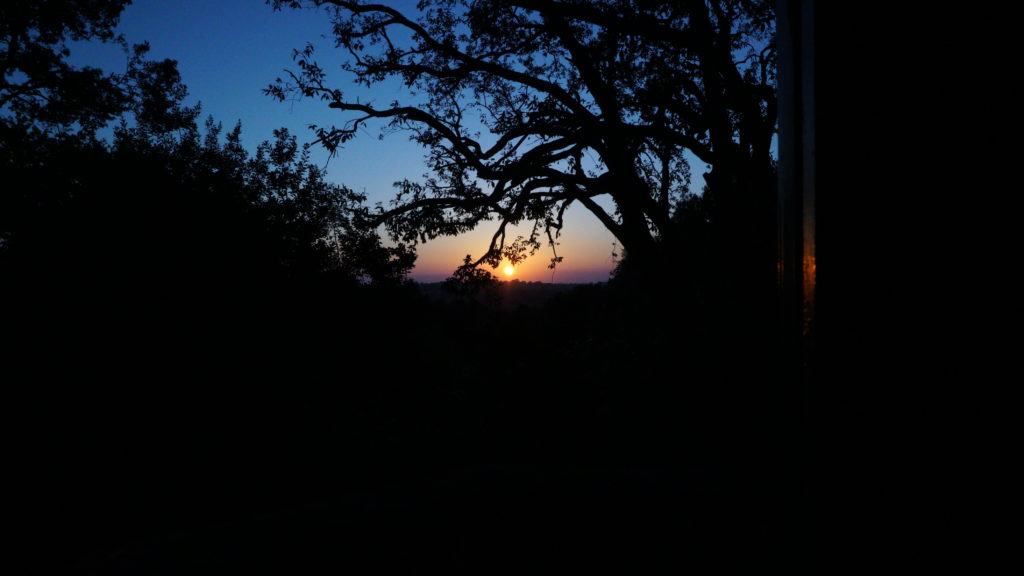 There were olive groves that effortlessly dappled the light and a woman selling honey on the side of the road. Days grew longer with the sun, afternoons stretching out like a cat until you got too hungry. I didn’t read the news. The emails I had planned on sending the first week still sat stale at the bottom of my inbox. We made five cakes and three different kinds of bread. I mostly thought about the light.

There is a trick I can still play with myself on the right sort of day: days that are the proper temperature in the morning and have followed enough mild days before them as to not lend themselves to drastic shifts in mind or body, slow enough to let my heart open back up a little, enough to let the light in.

Once in August in British Columbia on a bench looking out over the Pacific Ocean I had a conversation about dinosaurs. Millions of years between us splayed out over the water, their brawny paws on the same dirt that clung to my canvas sneakers, the fact of our smallness wrapped in some kind of capacity for awe. The present moment spilled out forward and backward, our vantage point like a toothpick in the top of a cake.

That’s the trick: finding a way back to that timeless place, the way I felt as a child barefoot on the first day of summer, as a teenager in a car with the windows down late at night, as an almost- woman in New York City going to the movies alone and taking myself out for ice cream, as a wife watching my husband pick up a child. The slip of time within which we somehow manage to see through it, see its shimmer and its crest, are taken breathless and reeling.

I walked back from the bench and tried to write it down so that I could save it. I never remember properly. I think I only write to catalogue. I wanted to box up this feeling so that I could have it for later; the piece of banana bread you save from breakfast so that you can eat it before lunch once the napkin has dampened against the bread in your pocket. What was it exactly? (Limitless wonder?) The newness of the world I’d tried so hard to learn, the one that I thought I’d been taught to wrangle into a state of cold liminalities. It is so shocking when we see it anew.

Here there is a sunset that each night bewitches us again, as if for the first time. It burns through the trees, floats on the horizon, glows the colors of blood oranges and bright ballet slippers and amber. It happens slow enough that I feel it behind my forehead, inside my ribcage. No matter where you stand, enough to let the light in. It is so shocking when we see it anew.